Few have managed to start their solo career in a more impressive way than Alessandro Bertoni: The L.A.-based keyboardist gathered three of the best musicians of the international jazz/rock fusion scene for his debut album Keystone:

„I have always wanted to collaborate with the musicians I chose for this record – since a was a teen, “ says Bertoni. „Virg, Ric and Brett have been hitting for years and they currently are among the most expressive and versatile players around.“

The album was produced by none other than keyboard star Derek Sherinian (ex-Dream Theater), who gave his protégé access to the keyboard arsenal at his Beachwood Manor Studios, famous for its superb sound. The result is a totally natural-sounding mix of progressive rock and jazz fusion where complex guitar riffs, powerful Hammond chords and intricate improvisations are interwoven seamlessly.

Alessandro Bertoni first stepped onto the international prog stage with the instrumental band Aphelion, who released their debut album Franticode in 2008. The disc was mixed by Derek Sherinian, which became the start of a long-standing collaboration. „As a keyboard player I’ve always pointed to Derek as a role model and I have known him personally since his work on Franticode“, says Bertoni. „It was really an honor for me to work with him, he has crazy skills as a producer. We are friends and we share the same musical taste, so everything went so smooth and musically pleasing.“

Despite the all-star lineup, Keystone is not just a showcase for the musicians involved: „I want the songwriting to be at the center first and foremost. I wrote the music with the goal of making it sound like a real band. But of course the musicians enhanced my songwriting to the stars with brilliant performances. And most of all they had the capability to get into my music easily and to understand my musical intentions.“

„It is a great pleasure for me to welcome Alessandro Bertoni to Generation Prog Records,“ says label founder Michael Schetter. „The fantastic backing band that accompanies him on his debut album speaks volumes about both his talent and his good taste. The parallels to Derek Sherinian’s own debut Planet X are obvious and in part clearly intentional, like the trilogies that open both albums. Fortunately, this is a comparison that Keystone need not fear at all!“ 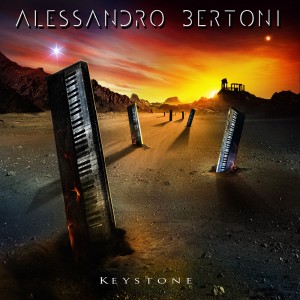