It always takes a lot of ambition to have a try at a concept album. Where other artists first dabble with the musical equivalent to comic strips, Gerald Peter and his band Circle of Illusion start off with what is pratically a musical novel: A filled-to-capacity CD with a continuous story that is further enriched across a 36-page booklet.

„The project begann around 2005 with a demo for the song Closing Doors,“ says Gerald Peter, keyboardist and composer of the band. „It was a first attempt to combine progressive rock with elements of film music. Afterwards many people said „You could write a rock opera.“ – and I thought that wasn’t such a bad idea. (laughs) And so came the ambition to do something like this and to really combine all the musical influences that in some way inspired me.“

The ideal parter to bring the world of Jeremias – Foreshadow of Forgotten Realms to life was found in vocalist and lyricist Taris Brown, who developed the story set in a surreal fantasy world and its characters in great detail

Brown himself plays the eponymous Jeremy, the female roles were given to Cara Cole (as the mysterious Jelena) and Elga Shafran (as Jeremy’s wife Sarah). The result is a progressive rock opera for the 21st Century where the lines between genres are blurred: In Jeremias, epic orchestral melodies and powerful guitar riffs alternate with playful keyboard lines, progressive rhythms, time signature changes, virtuosic solos and funky/jazzy grooves. Classical music and metal, progressive rock, funk, fusion and Hollywood-style film music – the album brings together vastly differing styles effortlessly.

„I have been following the development of Jeremias closely for two years, making me even more happy to be able welcome Circle of Illusion to Generation Prog Records,“ says label founder Michael Schetter. „It’s hard to believe that such an intricate work is a debut album. I consider Gerald Peter to be one of the great talents of the modern prog scene, as in my opinion Jeremias is right up there with modern classics like Testimony! This is even more amazing when you consider that Neal Morse had ten years at the helm of Spock’s Beard to prepare his first solo concept work.“ 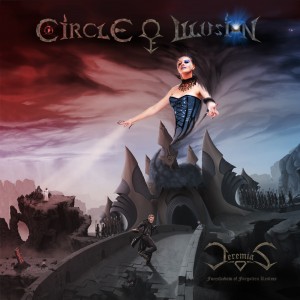