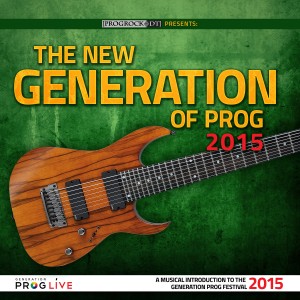 Last week for the hotel packages! 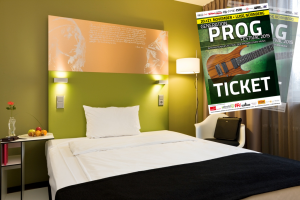 An update regarding the hotel packages: Only 13 rooms are left for Friday and 10 for Saturday. The last possible booking date is October 22, so only one week left! Until then they are available via our online store. 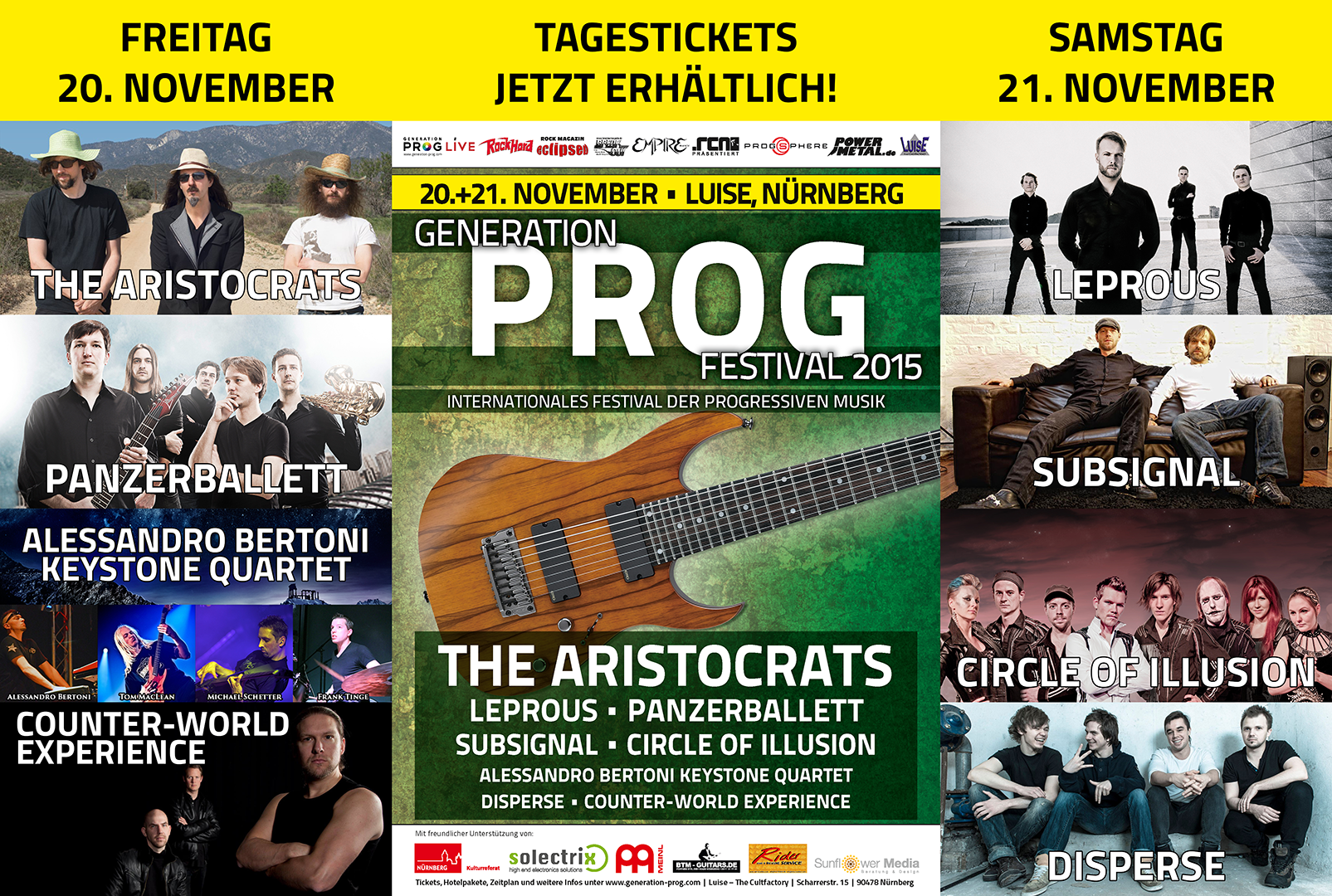 As previously announced, single-day tickets for the Generation Prog Festival 2015 are available via our online store starting today! Here’s a list of which band plays on which day: 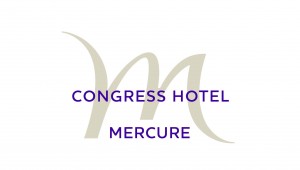 We have a surprising change to announce: Our partner hotel, the Wöhrdersee Hotel Mercure, will be taken over by a new owner at the end of the year and then renovated. Thus, it will cease operation on November 16. This forces us to switch over to the “Congress Hotel Mercure Nürnberg an der Messe”. This one is also pretty close to the festival venue and a tad above our previous choice quality-wise (also a four-star hotel). There’s going to be a free shuttle service from the hotel to the festival venue and back on both festival days. The prices stay the same, which means more savings for you compared to the regular offers. Those who aren’t happy with this change can of course cancel their booking through us.

More information about the hotel:
http://www.mercure.com/gb/hotel-2924-congress-hotel-mercure-nuernberg-an-der-messe/index.shtml

Don’t be surprised: We have adapted the rest of the website since, making sure that no outdated hotel information is found anywhere. 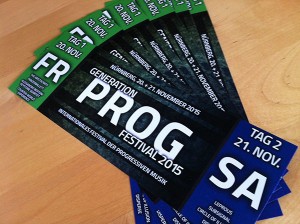 The tickets are now in stock, we will start shipping them this upcoming week. Tickets and hotel packages can be ordered via our online store.

The ticket pre-sale has begun! 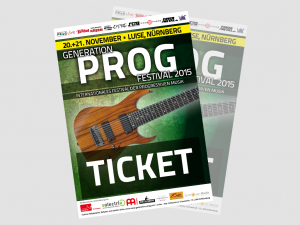 Tickets and hotel packages for the Generation Prog Festival 2015 can now be pre-ordered via our online store. The following options are available:

Single-day tickets without hotel will be available at a later point!

The Congress Hotel Mercure Nürnberg an der Messe is the official partner hotel of the festival. The comfortable 4-sterne hotel is within 5 minutes (by car) of the festival venue, the Luise – The Cultfactory, Nürnberg. For guests without a car, the hotel will be offering a shuttle service to the festival venue and back on both evenings. The hotel package deals are currently limited to 40 rooms, although the hotel could increase this number later. Either way we recommend ordering early!

The weekend hotel packages include two nights from November 20 until November 22. If you want to book additional nights at equally affordable rates or if you have special wishes (just one ticket but a double room, for example), please contact us under sales@generation-prog.com!

If you want to pay via wire transfer or you’re having problems with the ordering process, please also contact us under sales@generation-prog.com!

We should start shipping tickets sometime in August.

We can now announce the date and location of the next Generation Prog Festival: 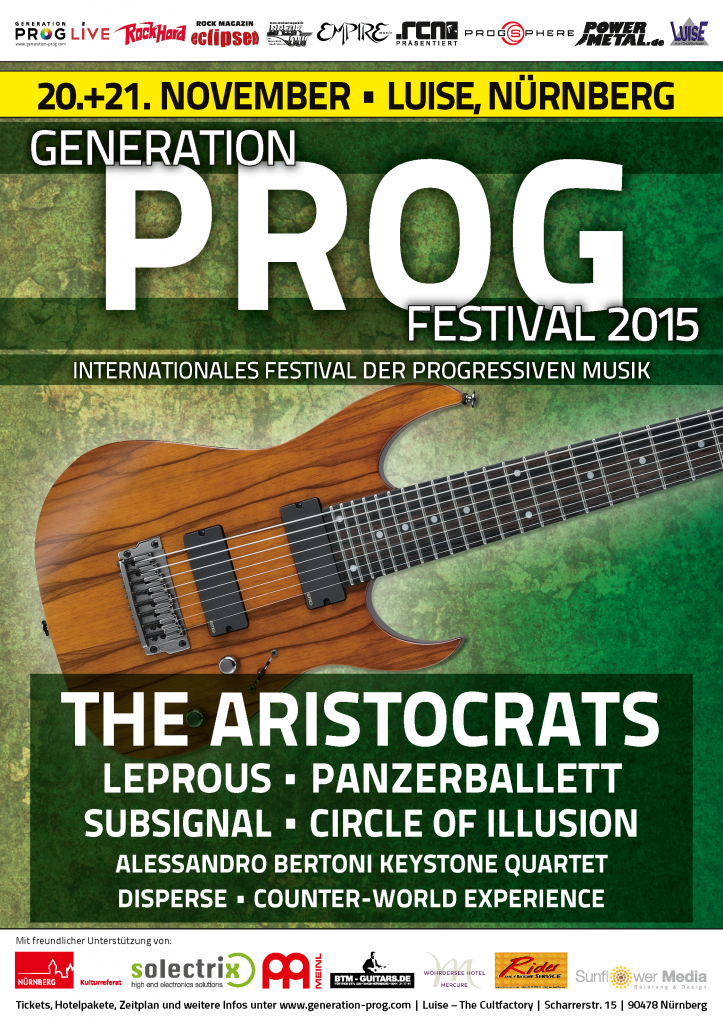 Now in its fifth year, the international festival for progressive music will feature a world class line-up over two nights. 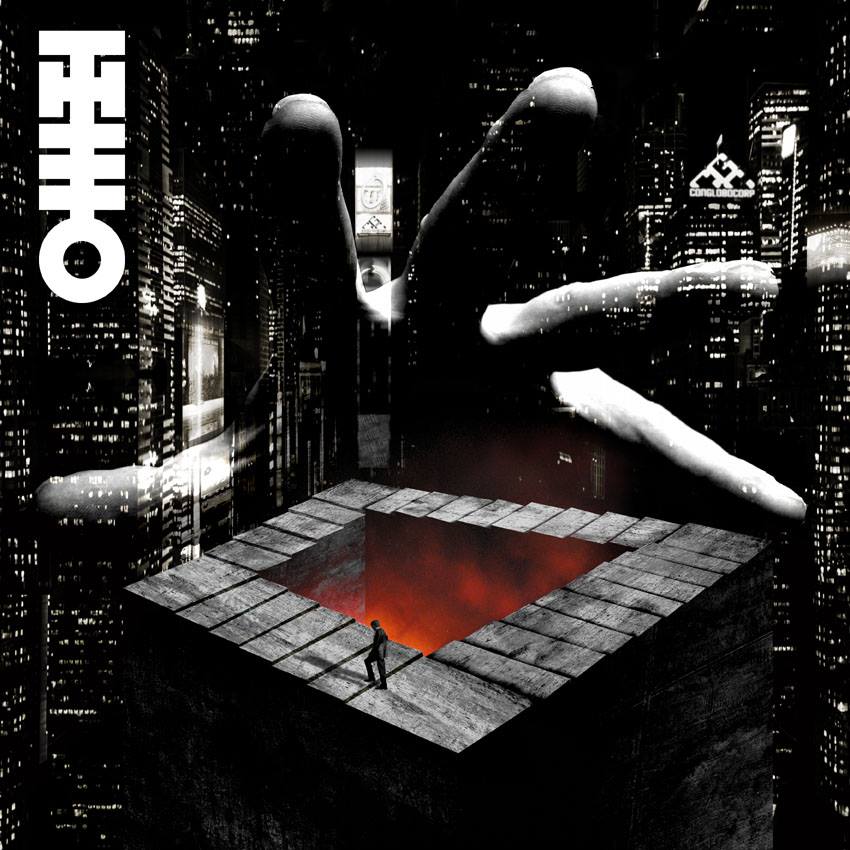 The pre-sale for this year’s Generation Prog Festival has been a great success. We’ve managed to sell our entire pre-sale allotment of tickets with 10 more days to go until the event.

But don’t fret: We’ll have some more tickets available at the door! However, we recommend arriving early – which should be a must anyway, given the great bands playing!

Please note: We will only be able to accept orders for the hotel package deals until 3 p.m. on October 31, because that’s the booking deadline or the hotel rooms. So if you want to take advantage of this affordable offer, don’t hesitate any longer!

And the ticket pre-sale is also coming to an end: As of today (October 29), only 40 remain available. The plan is to offer some more at the counter, but the exact number of those is unclear, as we don’t know with 100% certainty how many people we’ll be allowed to let into the MUZclub. So if you want to be there, make sure to order your ticket soon, otherwise it could be too late!